a new way to kill time.

yet another jarring change…

As I have been suffering from a Giants withdrawal living in my beloved Chicago, living right coast affords me the opportunity once more to wave my geek flag proudly.

They have been performing theme Wednesday nights for the past month at the Bowery. I am not exactly sure what the theme was for the night that I attended. It was either “Wear suits in 94 degree weather,” or “Horn Extravaganza.”

I won’t bore you with too many details, though I would be remiss if I didn’t mention that they performed Spider, Purple Toupee, Tambourine Man, Maybe I Know, as well as their one love song (arguably), She’s an Angel.

Did I mention that Young Master J picked up tickets to this Wednesday’s show as well?

a moment to lose my cool…

Those who know and love me have good reason to worry. Girlfriend’s sanity is hanging by a piece of dental floss. At some point, my world view shifted in a way I can’t appreciate. I now have zero tolerance for those who are not entirely self sufficient. I have little to no patience for the judgmental people in my sphere. I am floored when I am required to repeat myself. Honestly, I am starting to believe the world to be populated by complete morons.

This is not a good way for me to be. This isn’t me. Sigh. What happened to the sweet, fun-loving, party girl? Maybe I miss Chicago. It is odd to think, as I know and love so many people here. I grew up here. I was raised here. It’s familiar. It’s home. But frankly, this isn’t the same place it was when, you know, crack was king.

Maybe I was too young to notice, but since when did everyone in this city become so !@#$ competitive? It’s about who is working late every night. It’s about how much someone makes. It’s about who has the better apartment, who is wearing what dress, who ate at which restaurant, who is seen with what person, who is going to the better parties, who had the best weekend, blah, blah, blah.

Seriously. Give it a rest. For a girl who has spent a lifetime not giving a crap about the superficial, I can’t seem to escape it. If I want to spend the weekend in my jammies watching TV, eff you for judging me. If I want to see Transformers instead of Mon Meilleur Ami, get over it. If I want to order in from the cheap diner around the corner instead of hitting the new Sino-French fusion place, eat it.

Like I said. Girlfriend is so very close to losing it.

While I might be prone to hyperbole, I can honestly say that it’s the sixth worst smell I’ve ever encountered.  Literally.

We were watching TV when I first noticed it.  I thought that it might be me.  Mortified, I scrubbed my feet all the way to lemony freshness. Returning to the scene of the crime, I realized.  No.  This pungent aroma emanates from another source.

Ugh.  The smell.  It’s the kind stench that takes up residence in your nostrils, and adds an extension throughout the rest of your nasal cavity.  No exaggeration.  Worst of all, it got in my mouth.  I gargled for a good ten minutes trying to get clean.  Nauseating.  Simply nauseating.

I was hoping that it was a one shot deal.  I’ve said it before, and I will say it again.  If hope is a thing with feathers, my thing flew the coop.  My luck, it’s probably a chronic,  summer stink, or maybe a glandular thing.  Either way, his absolute ignorance of the tang is mind boggling.

Can he not smell that?  I mean, really!  Does he think that I can’t?!  Did I mention that he likes to put the duo of rankness on the coffee table?  Good grief.

So how does one kindly let someone they know and love that their feet either need to be decontaminated, or hacked off and tossed in with the rest of the rotting compost?  Let me know.  Meanwhile, I’ll be waiting over here.

another jarring change of pace… 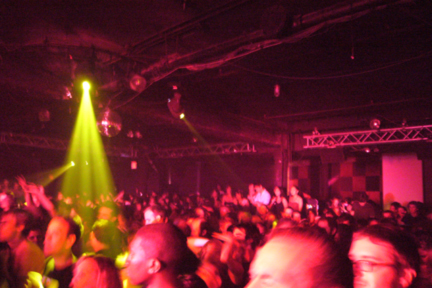 On 7.7.07, Young Master J and I hightailed it to Studio B in the too cool for school Greenpoint neighborhood of crooklyn to see Simian Mobile Disco. If you’re like me and seriously out of the loop when it comes to the electronic dance music scene, well there you go.

It seems that SMD was making their “live” NYC debut. Those who know and love me are full aware that I use air quotes as sparingly as possible. What can I say? They annoy me. But in this case, it can’t be helped. I can’t begin to figure out what was happening during the performance, but it went something like this: center stage was a huge patch bay of sorts. One of two guys was jiggling along with the music, all the while plugging and unplugging patch cables. Another guy behind the bay was doing something else. What it was, I can’t be sure.

Okay, so it wasn’t the most inspiring performance. On the other hand, the output of whatever the heck it was they were doing spit some pretty outstanding party music. Take that Moby, you pretentious hack. They played a fun, fun, fun fifty minute set, and left the crowd wanting just a bit more. With that, I leave you with these six words:

Hipsters and dance music. Who knew?

p.s. Item 39: Made it through an entire show, thank you very much.